5 casting down arguments and every high thing that exalts itself against the knowledge of God, bringing every thought into captivity to the obedience of Christ,

Strongholds are human arguments produced by human viewpoint. Paul’s enemies were ultimately not people but Satan’s philosophy or worldview. The issue is who is controlling one’s thoughts. Paul did not say here that he could out-debate his opponents. On the contrary, his weapons were spiritual and biblical. Any argument that sets itself against the knowledge of God will be defeated by that same knowledge.

and every high thing

that exalts itself against the knowledge of God,

“Every high thing” involves any worldview raised up against the truth of the Bible. Willful independence is the root of all sin. This kind of reasoning refuses to retain the knowledge of God (Ro 1:28). It appeals to skepticism and cynicism. This intellectual independence from God puts man in the place of god. His thinking becomes sovereign over everything. He is solipsistic in viewpoint. All of these are attempts to shield oneself from knowing God (1 Co 1:21-23).

bringing every thought into captivity

In spiritual battle, certain entities must be captured and put in prison. This involves “every thought.” Again, captivity involves not people but thoughts. Any and all viewpoints must be captured and brought to the obedience of Christ. They need to be surrendered to the Commander-in-Chief, the Lord Jesus Christ. The effectiveness of the gospel depends on its presentation as God’s Word, not as something apologetically defended but as content to be believed.

to the obedience of Christ,

The obedience of Christ is the fortress into which captives are led. This involves renouncing dependence on unadulterated human understanding. The issue is submission to the teachings of Christ.

The principle of displacement of human viewpoint with divine viewpoint is God’s design for spiritual victory.

The more we think God’s Word after Him, the more we become like Him. To do this we must first eject sinful thoughts. Simple rejection of sinful thoughts will create a vacuum in the soul, which will draw sin back into the mind. However, when we bring God’s thoughts into our minds repeatedly, His perspective becomes predominant in our viewpoint. This process is crucial to growing into maturity in Christ. 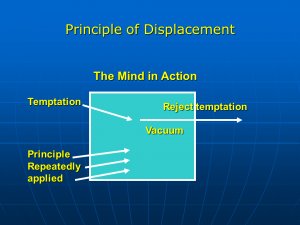 Submission to biblical truth demolishes the fortifications of Satan. Spiritual combat brings human viewpoint into captivity so that Christians will obey Christ. Their thoughts must submit to Christ and conformity to His will. Discipleship is a process of renewing one’s mind (Ro 12:2). The objective of biblical warfare is to change the assumptions of belief. People think in either a non-biblical or a biblical manner. The weapon of biblical truth is the weapon of choice for believers.

Log in or register to manage your subscriptions.
Unsubscription Information